That title almost sounds like a horror movie, ha! But no, it’s actually a lovely room. It’s just tricky to figure out the best way to use a weird room. Here’s our plan.

This house is in constant flux. Yes, most houses are to some degree, but we just moved into this one a year ago after having sold almost all of our furniture. It’s kind of a long story but the gist is that when we sold our old house, the plan was to move into a home that had a much smaller footprint and our big stuff just wasn’t going to fit.

We figured hey, no big deal! We’ll have less to buy and we were walking away with a good chunk of change from the work we had put into our old home. Ha, best-laid plans. That smaller home ran into major building delays. We were living in a hotel with two small kids and had zero desire to extend our stay to what they were predicting to be a year (!) 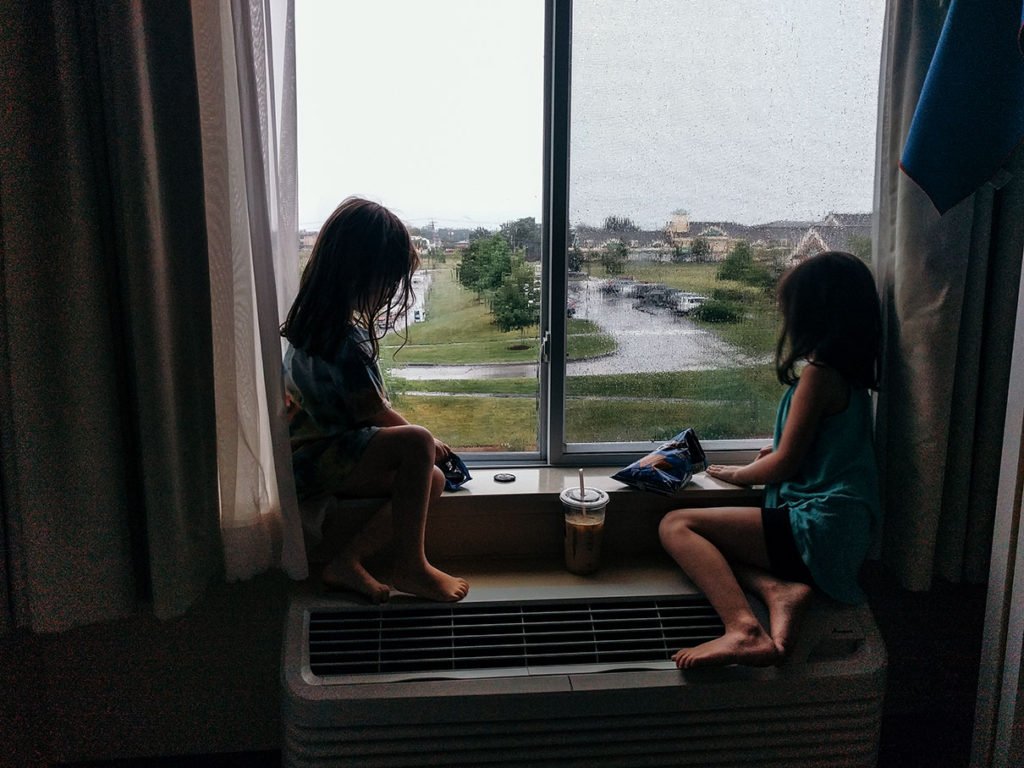 That summer was a mad scramble to find a different forever home and it turns out, this is the home we were meant to find all along. The kick in the pants though is that it’s BIGGER than our old house. Ah, the irony.

OK, so we had to get way more stuff. Some of which we’d already had and could have used :-/ But we decided to take the opportunity to really design this house thoughtfully: make it exactly what we wanted and to our current taste even if it meant living without for a bit. We basically had folding chairs, a picnic table, and the couch we kept from our last home. This is slightly exaggerated, but not by much. 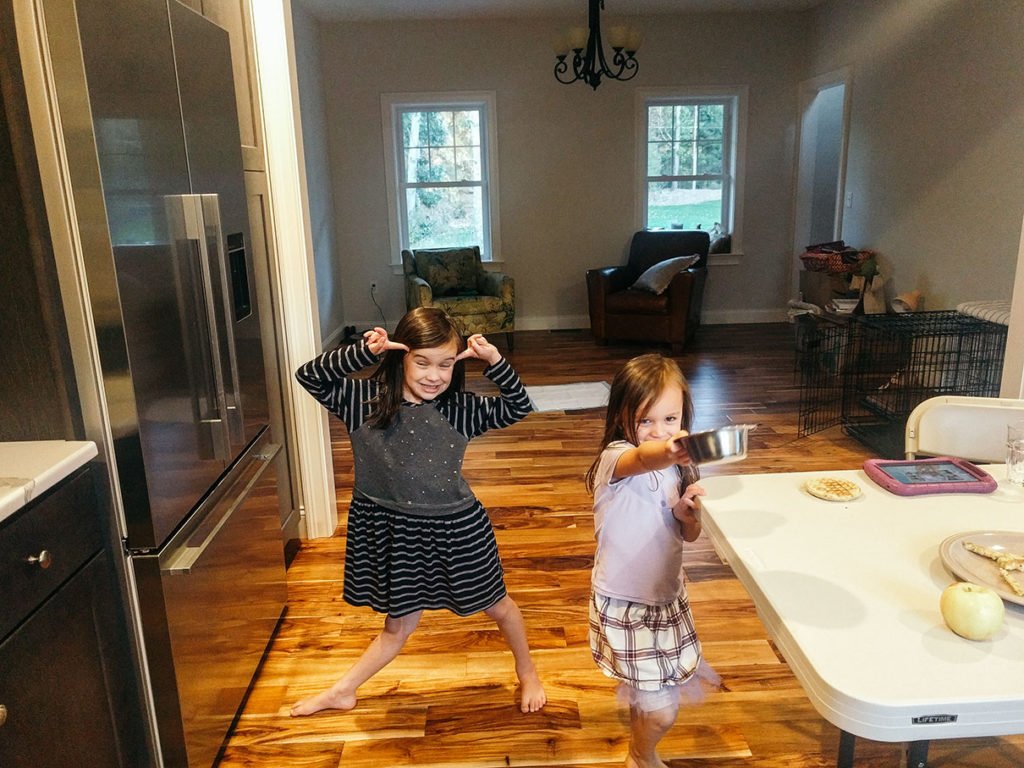 This house has come sooooo far in just one year. Behind the girls is the before of our new and vastly improved loungey library.

So yeah, this house is constantly in flux. We borrow and move things from room to room as we purpose, then repurpose what each space will be. We have this weird room at the top of our stairs. It would be considered a landing except for the fact that it is 12′ x 14′ (the size of a comfortably proportioned living room). When we first moved in, we were a little at a loss for what to do with it.

Here is the first iteration of that strange space: 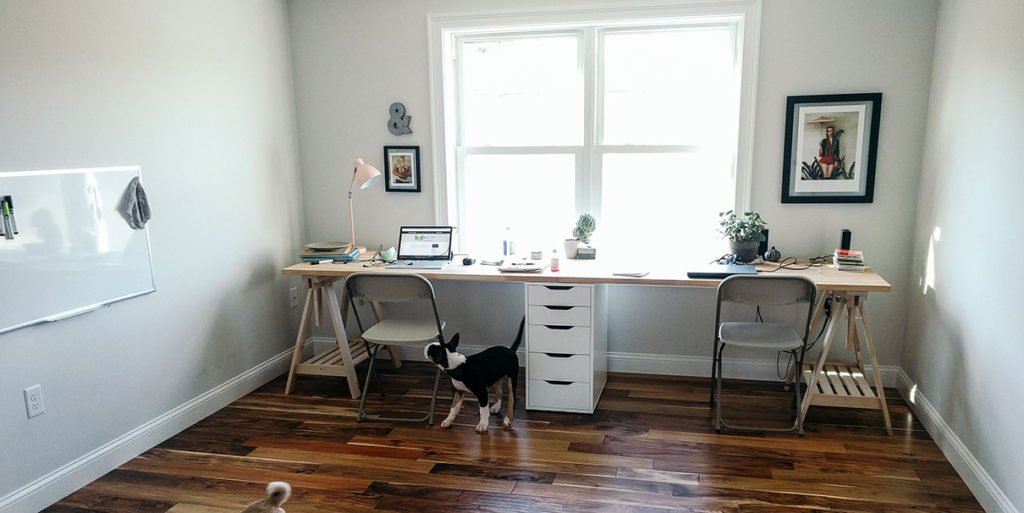 Getting there. Cool desk situation despite the folding chairs. Here is version 1.2 once we bought grown-up chairs: 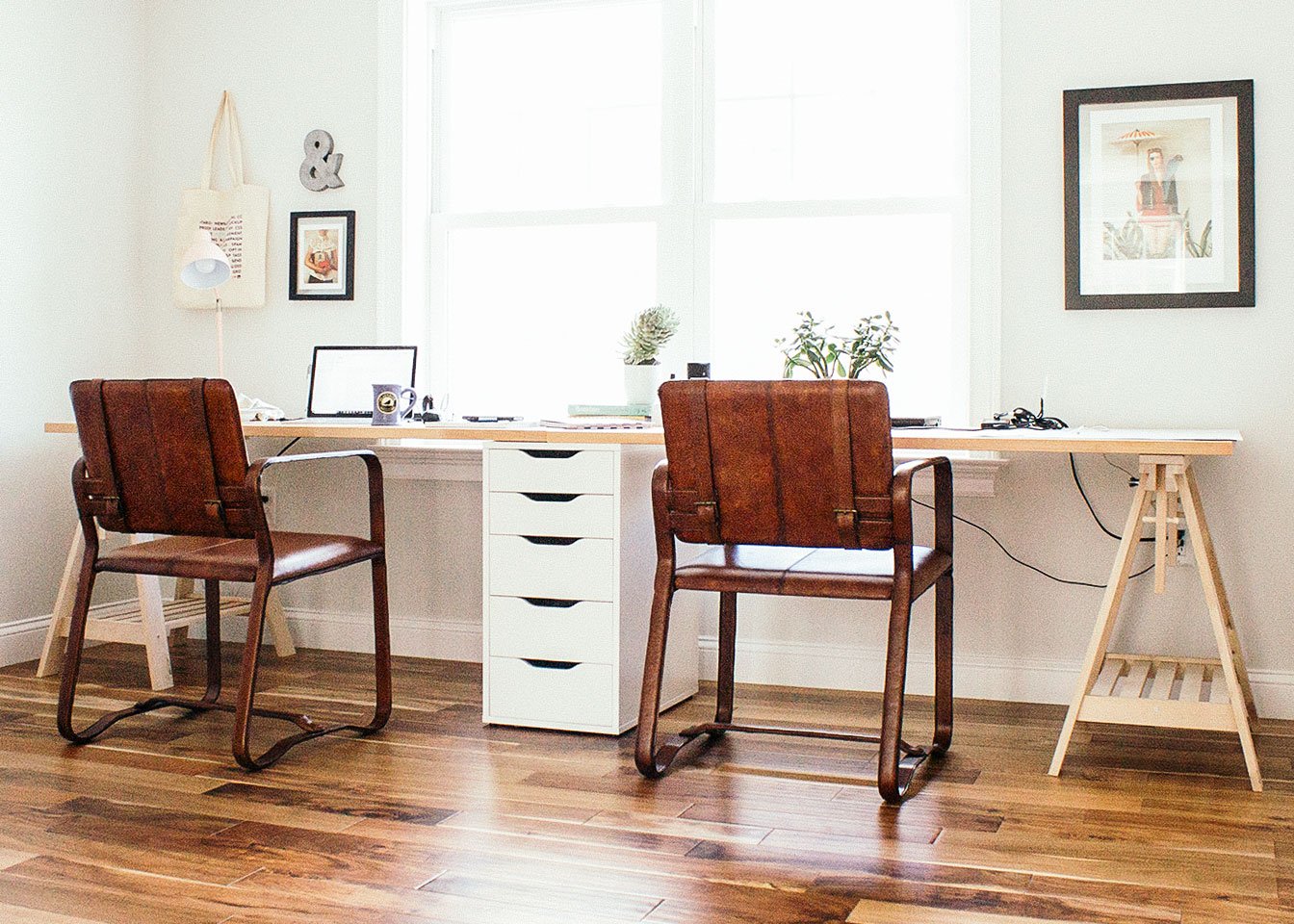 I actually really like this incarnation of the room. It was briefly my office. Pretty, but such a terrible idea. I love the light in this room but it’s, well, open. Not having a door was a nightmare. My kids are home with a sitter while I work and they were constantly stopping by to show me something or chit-chat because I was RIGHT THERE. Love ’em, but nope.

Luckily the girls decided they wanted to share a bedroom so I co-opted the third bedroom as my office and turned the weird room into this: 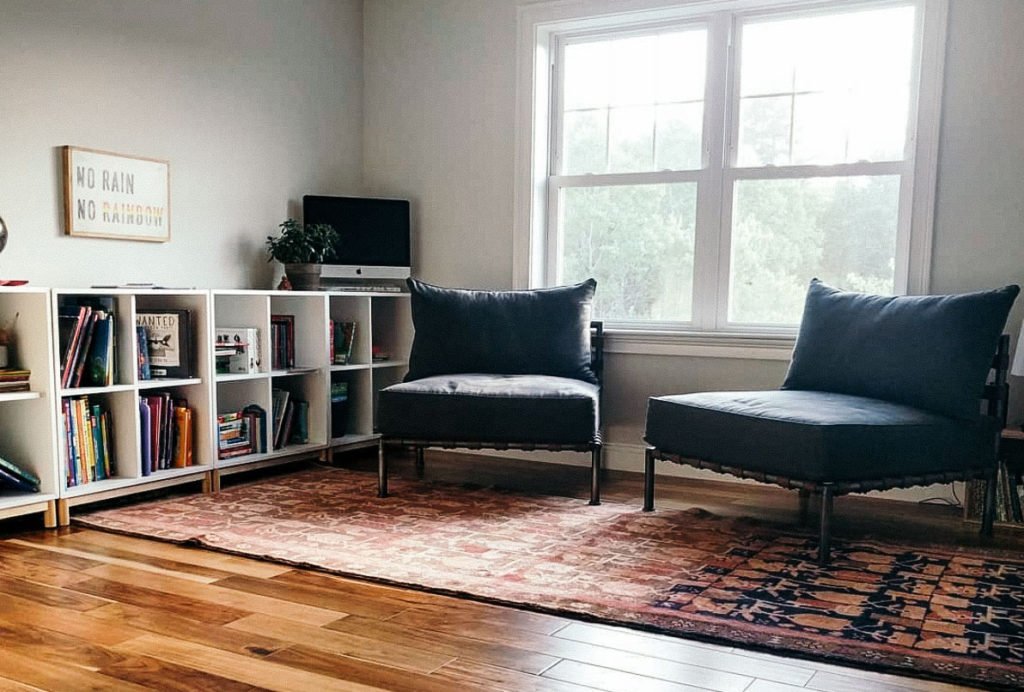 Not bad… definitely something to work from. The builder told us he’d envisioned this space to be a teen hang-out area. Separate so they could have their own space, but open enough that it could be monitored. Most floorplans would have made this a fourth bedroom but I love that he had such vision. The light that floods through here is awesome and yeah, once the girls are older having their space so integrated into the public areas of the house will be pretty cool.

Annabelle has dubbed this her apartment. She’s 7. Lord have mercy LOL. So per the builder’s vision, this has turned into a hang-out space for my girls. My first shot at the room was nice looking but missed the mark in terms of function. It was essentially a pretty pass-through. A complete waste of space.

Matt had some ideas for how he wanted the room to function so this past weekend I played around with some furniture rearrangement. We want this to be a place for the girls to hang out, read, do projects, play music, etc. We want to be able to sit and interact, do homework, and snuggle. This layout, so far, really fits the bill. The table has a super durable Formica top (that looks like marble) so they can go nuts with the art supplies. the facing chairs allow for conversation and the poufs invite bonus guests to pull up a seat and join in the fun. 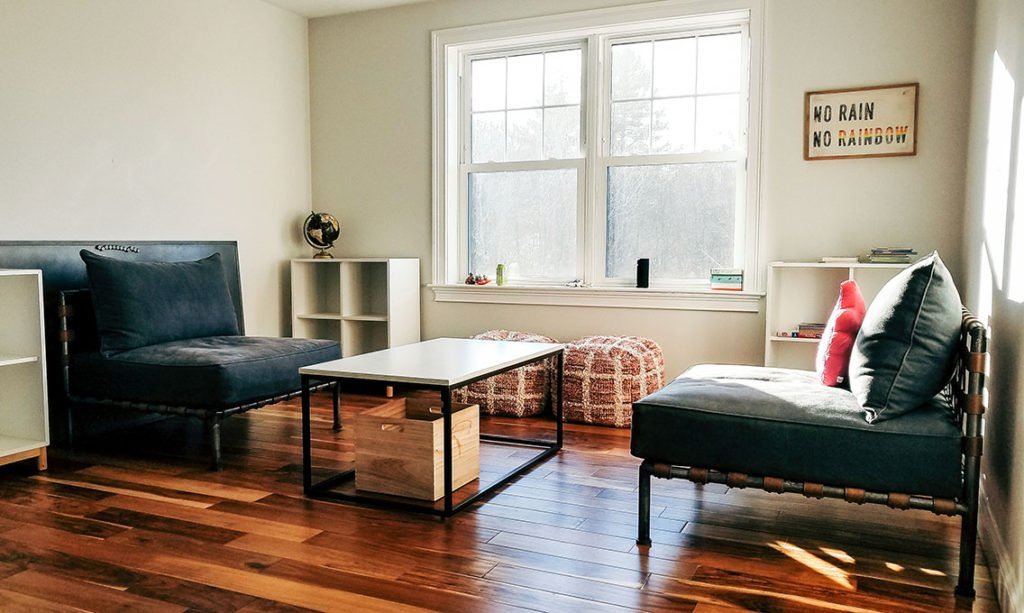 The girls were very excited by the process and the results of the One Room Challenge and Annabelle, in particular, has discovered a passion for home design. I showed her how Pinterest works and she has been pinning her little heart out with ideas of how to make the space personal and beautiful.

Our current project is making this little living room super special. I want the girls to have a lot of say in it but realistically, it’s a very public space in the house so I will need to provide at least some guidance. She has been pinning some weird shiz: 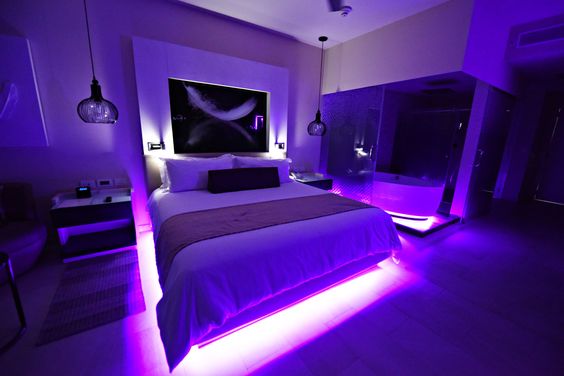 Cool for something, but hard pass for me.

The general layout is set but we obviously need a lot in the way of accessories, rug, and personality. The hope is to be done by the end of the year. We are also embarking on a full basement reno so funds and attention will be spread a bit thin. Let’s get creative 🙂

How do you tackle kid’s spaces in public areas? Do you let the kids have free reign or do you take the lead? 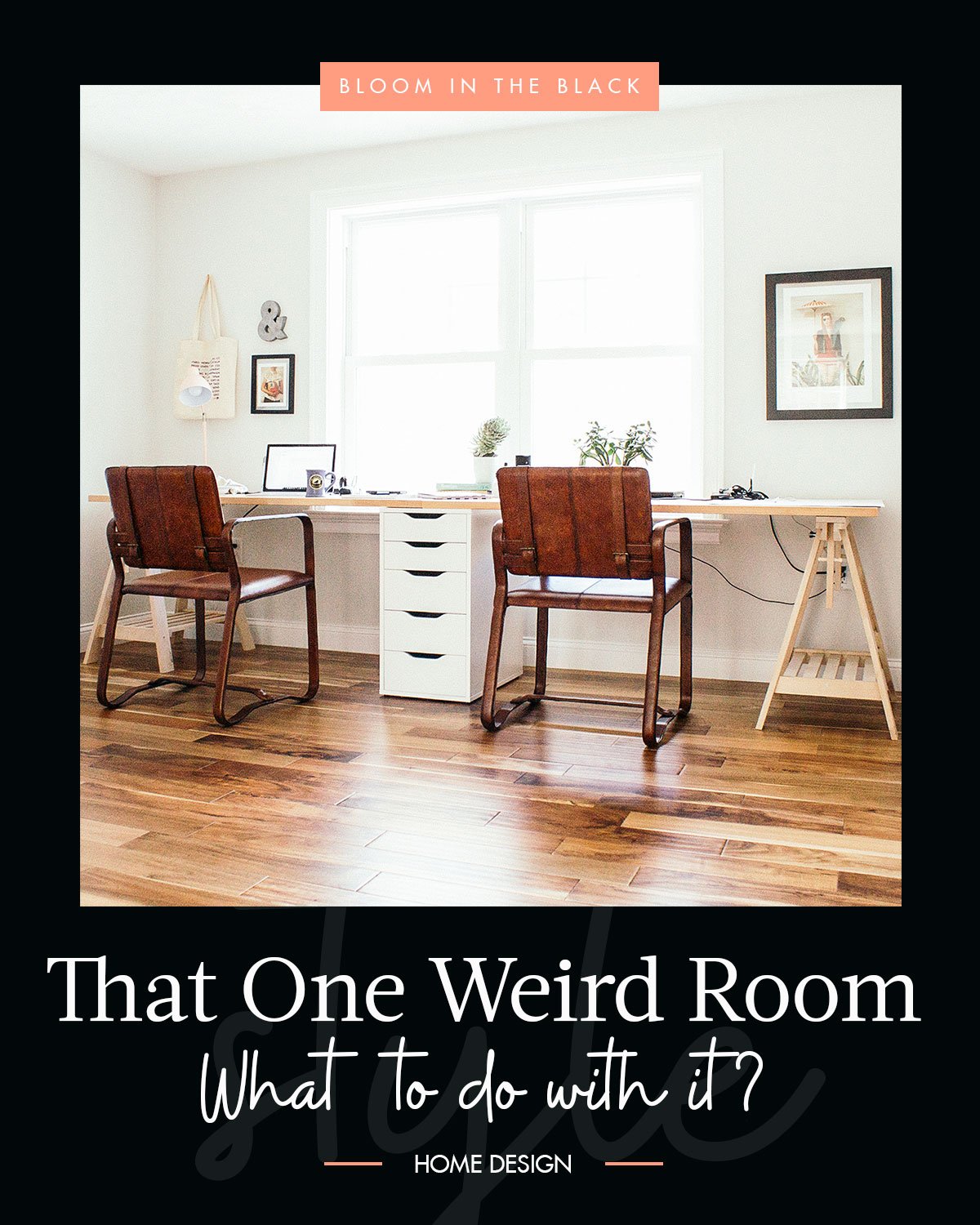 ORC Week 4: Wallpaper, and Walls, and Tables, OH MY!
Turn a Closet into a Cozy Reading Nook for Kids: 4 Essential Elements
Plans for the Ultimate Family Room
Here's What's Coming In 2019
Previous Post: « ORC Week 6: The Big Ta-Da!
Next Post: How to Involve Your Kids in Decorating » 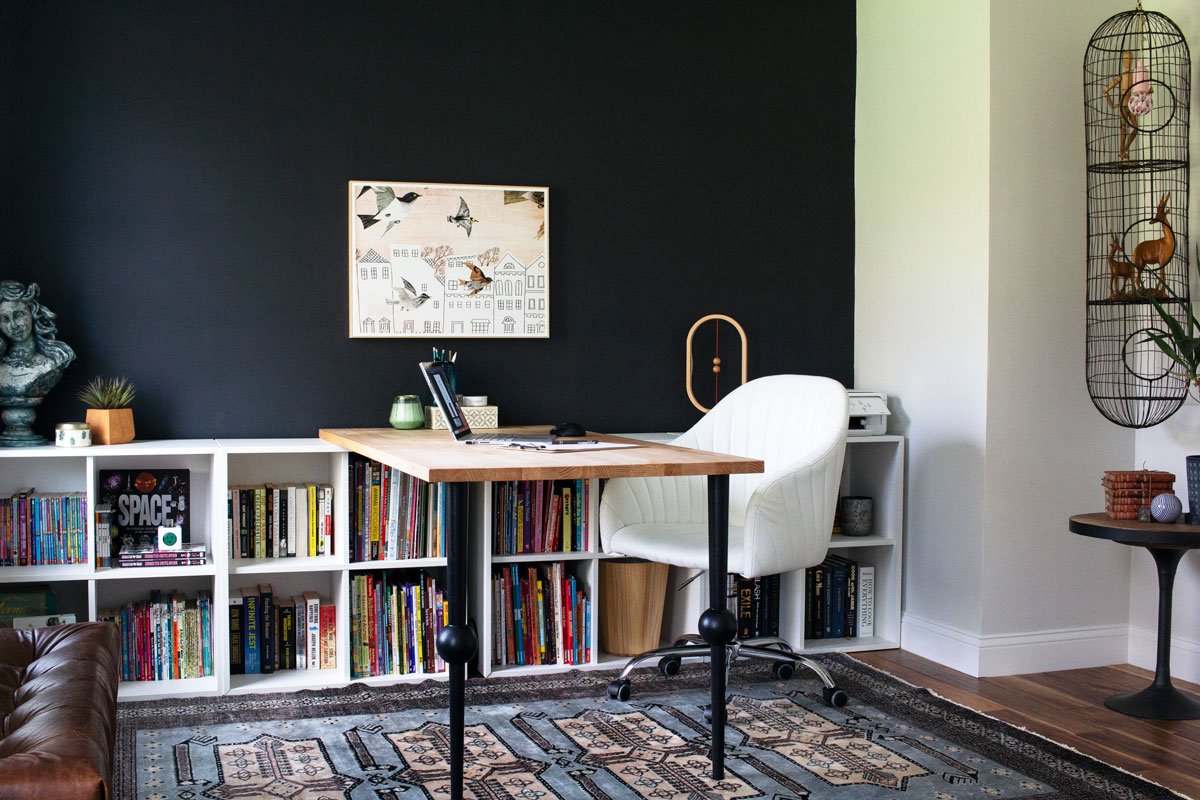 2020 is the Year of the Home Office
Get yours in shape with all the best home office projects and inspiration in one place.

Past One Room Challenges 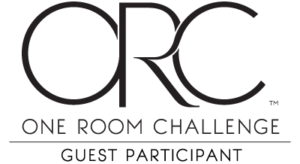 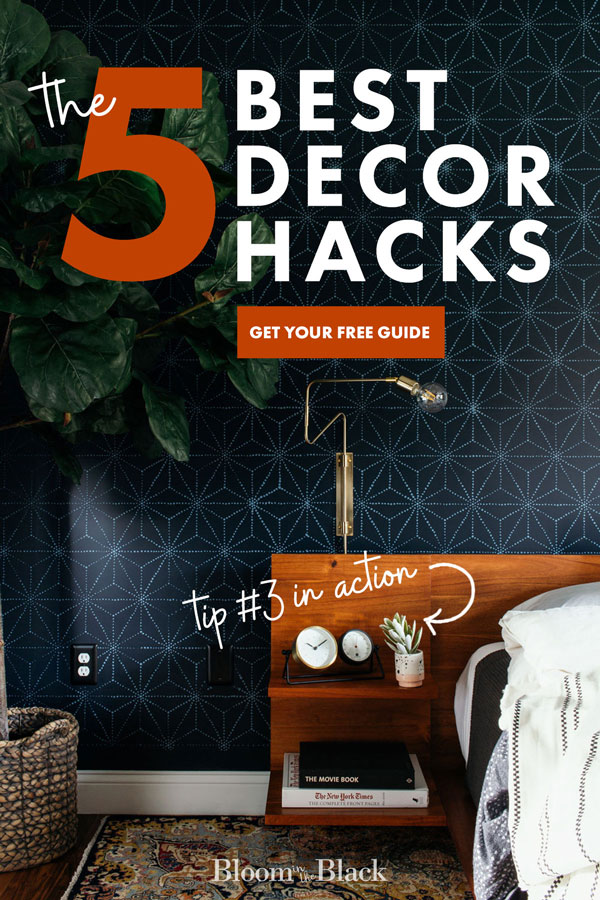 Thanks so much to @apartmenttherapy for featuring

I already miss the weekend. You?⁠ ⁠ We all rel

Happy hump day friends! Is that even a thing anymo

Do you have a room that you're constantly stealing

Josie's favorite spot in her new room is this fun

Finding this teeny tiny settee was nothing short o